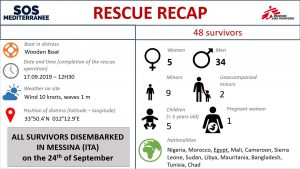 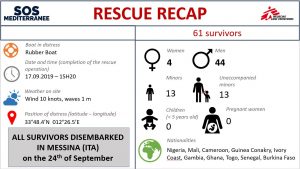 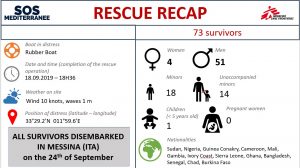 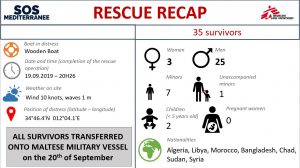 – On the 17th of September Ocean Viking conducted 2 rescue: 48 survivors on wooden boat and 61 survivors on rubber boat

– On the 18th of September Ocean Viking conducted a rescue: 73 survivors on rubber boat

– On the 19th of September Ocean Viking conducted a rescue: 35 survivors on wooden boat

– On the 24th of September Ocean Viking leaves Messina port

– On the 27th of September Ocean Viking arrives in Marseille port

” MV Ocean Viking declares readiness for SAR operations in the Central Mediterranean Sea, South of Lampedusa and Malta, outside of Libyan Territorial Waters.”

The wooden boat is overcrowded, most people have no lifejacket.

Alert phase: apprehension exists as to the safety of the boat and its occupants.

Ocean Viking launches 2 RHIBs in the water to assess the situation: the wooden boat is unseaworthy, overcrowded, with about 50 people on board, no Life Saving Appliances, children, women and men, all exposed to the elements.

Ocean Viking has visual contact with a blue rubber boat

Ocean Viking has visual contact with a blue rubber boat.

The rubber boat is overcrowded, many people have no lifejacket.

Rubber boat is in proximity of Ocean Viking

Rubber boat is unseaworthy, overcrowded, with about 60 people on board, no Life Saving Appliances, occupants are all exposed to the elements.

RHIBs start the transfer of survivors onboard Ocean Viking

RHIBs after lifejackets distribution completion, start the transfer of survivors

As you know, under the International Convention on maritime search and rescue to which Libya is a state party, a rescue is only considered as completed once rescued people have been disembarked in a place of safety (As define in the Annex to the 1979 SAR Convention, paragraph 1.3.2 and in the International Maritime Organization 2004 Rescue Guidelines)

It is within this framework that the European Commission and United Nations High Commissioner for Refugees issued clear positions stating that currently Libya does not meet the criteria for being designated as a place of safety for the purpose of disembarkation following rescue at sea (https://www.refworld.org/docid/5b8d02314.html

I understand that among the survivors on board there are people, including women, children, unaccompanied minors and pregnant woman, who say that if returned to Libya, they would be in danger of being subjected to severe abuses.

In light of this clear guidance and international law provisions, we are not in a position to head towards a Libyan port, which cannot be considered as a place of safety for rescued people.

I respectfully request that, as the JRCC coordinating, you please provide with the indication of a Place of Safety which fulfils all requirements under all applicable international laws, where the survivors can be safely and promptly disembarked.

Please acknowledge receipt of this message.

Ocean Viking proceeds towards the target at max speed.

No POS is assigned for those rescued outside Italian SRR

MTJRCC sends an email to Ocean Viking, with Norwegian Flag state and FRMRCC, informing that is trying to make arrangements for disembarkation of those rescued in its SRR

Ocean Viking is advised to contact other RCCs able to assist.

We are grateful to RCC Malta on the arrangement of a Place of Safety for the 35 survivors of the latest rescue operation conducted by MV Ocean Viking.

Equally important is the need to enable the 182 other survivors onboard the vessel, some of them already being on board for many days, to disembark as promptly as possible in a Place of Safety.

We acknowledge Malta’s position on the matter.

We would like JRCC Malta and MRCC Roma to kindly be informed that this vessel would accept assistance from all able to assist RCC in this process of designating a Place of Safety as early as possible.
We take note that JRCC Malta has addressed our request to those considered able to assist.

As the spirit of cooperation between States is enshrined in Chapter 3 of the SAR convention (3.1.1. and 3.1.6.), we would be grateful to both JRCC Malta and MRCC Roma to mobilize those other RCCs they consider able to assist.

While waiting for further instructions from you or those RCC you would consider able to assist, we do remain in position 35-57’N / 013-19’E.

Ocean Viking sends an email to MTJRCC and ITMRCC, copying Flag State and FRMRCC, to request a Place of Safety for the 182 survivors

Having not received a reply to our last email sent on 20th Sep at 1915B, we would appreciate if IT MRCC and Malta RCC could please provide this vessel with a feedback.

We understand that the 182 survivors on board MV Ocean Viking were rescued in a sea area that is outside of the SRRs of Italy and Malta, hence not under primary responsibility of IT MRCC and RCC Malta.
However, please note that Ocean Viking has already exhausted the steps in relation to the competent authorities of the Libyan SRR.

On the 17th of September Ocean Viking requested a Place of Safety from JRCC Tripoli and on the 18th of September, JRCC Tripoli communicated Al Khums as a Place of Safety for the disembarkation of the survivors.
Within the framework of the relevant Conventions and Regulations, the European Commission and United Nations High Commissioner for Refugees issued clear positions stating that currently Libya does not meet the criteria for being designated as a place of safety for the purpose of disembarkation following rescue at sea (https://www.refworld.org/docid/5b8d02314.html)
Therefore, on 18th of September, Ocean Viking had to request from JRCC Tripoli an alternative POS that can qualify as such, but the Libyan authorities have been unresponsive ever since.
Once we were not provided with an alternative and valid POS by the Libyan authorities, Ocean Viking has requested a POS to IT MRCC and RCC Malta, which we considered as the better able to assist RCCs due to their geographical proximity and the historical involvement in the SAR operations across the central Mediterranean sea, where both countries have contributed to fill the shortcomings in the Libyan SRR.

Nevertheless, as stated in our last email, we would accept assistance from all RCCs able to assist in this process of designating a Place of Safety as early as possible.

Recalling the provisions of Chapter 3 of the SAR Convention, Ocean Viking kindly invites Italy and Malta to co-operate, and where necessary to co-operate with those other RCCs they consider able to assist, to make the necessary arrangements to identify the most appropriate place for disembarking these 182 persons found in distress at sea as soon as reasonably practicable.

We consider that the spirit of co-operation and solidarity, which is the foundation of the relevant Conventions, should give impetus to all initiatives to arrange a prompt disembarkation of survivors.

The 182 rescued people on board the Ocean Viking include 13 women 1 among whom is 8 months pregnant, 40 minors, and a newborn baby. 29 of the minors are unaccompanied, and 6 of the women are single travellers. When they were brought onboard Ocean Viking, the survivors were suffering from fuel inhalation and fuel burns. Due to weather conditions many survivors are suffering from seasickness. Some of the survivors on board speak of being held in places of captivity for varying periods of time, and present marks of physical violence. Situation on board with limited space coupled with the deteriorated weather conditions are negatively affecting the social dynamics among the rescued people. The partial disembarkation of those who were later rescued in the Maltese SRR brought additional psychological stress among those remaining on board.

Please note that an intensified environment of stressors may potentially cause conflicts among the rescued people, which may escalate into security concerns for the people on board.

While waiting for further instructions from you or those RCC you would consider able to assist, Ocean Viking is standing by in this area. Vessel current position 36°03’N / 013°17’E