SAR Operations in the Central Mediterranean 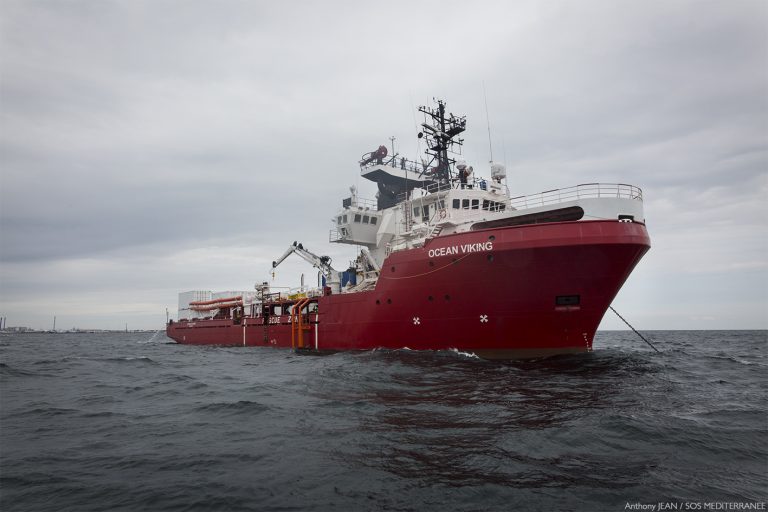 The Ocean Viking is a cargo vessel conducting search and rescue activities in the central Mediterranean. The ship is chartered and operated by SOS MEDITERRANEE in partnership with the International Federation of Red Cross and Red Crescent Societies (IFRC).

It was originally conceived for mass rescues, as an Emergency Response and Rescue Vessel (ERRV) (a stand-by offshore vessel ready for rescuing a large number of passengers and taking care of a large number of people in case of mass casualties). It is 69.3m in length over all x 15.5m beam. It was built in 1986 and has a gross tonnage of 2090.

The ship is owned by Hoyland Offshore AS. The flag state registry is Norway. It used to be an offshore supply and rescue ship for oil and gas industry in the North Sea, mainly in the Norwegian sector.

The Ocean Viking is very robust and stable as it was built for the harsh conditions in the North Sea. Its maximum speed is 14 knots and it can maneuver quickly with bow, stern and an additional azimuth thruster under the bow.

Davits allow for quick and safe deployment of rescue boats while underway.

SAR operations onboard the Ocean Viking were launched in August 2019. Previously, from February 2016 to December 2018, SOS MEDITERRANEE chartered the 77 meter long special purpose ship Aquarius, built in 1977 and owned by the shipping company Jasmund Shipping. Operated in partnership with MSF, the Aquarius rescued 29’523 people in distress.

The crew members are professional staff and consist of three teams.

A marine crew of 9 members who are employed by the ship-owner. This crew includes the captain, officers, able seamen, engineers and cooks.

A relief and protection team from the IFRC, including medical staff, a midwife and professionals who can provide psychological support and assist those who are particularly vulnerable and in need of extra protection, such as unaccompanied minors and victims of human trafficking.

SOS MEDITERRANEE works as a European association with teams in Germany, France, Italy and Switzerland in a European network, jointly financing and operating a rescue ship. From February 2016 to December 2018, SOS MEDITERRANEE chartered and operated the rescue ship Aquarius, with which it provided assistance to 29’523 people in distress in international waters between Italy, Malta and Libya.

After 7 months of research, SOS MEDITERRANEE has resumed its SAR operations in August 2020 with a new ship, the Ocean Viking.

The medical care onboard the Aquarius and the Ocean Viking has been provided by:

– The International Federation of Red Cross and Red Crescent Societies (IFRC) since September 2021.

– Saving lives: Rescuing people from distress at sea and providing emergency medical treatment on board.

– Protect and assist: Providing medical care and first psychological support to the rescued people on board.

– Testify: Giving the rescued people a voice. Showing the many faces of migration. Informing the European public about the situation for people in distress in the Mediterranean and commemorate those that never arrived.

SOS MEDITERRANEE is based on the respect for human beings and their dignity, without partiality as concerns their nationality or origin, their social belonging, religious belief, political position or ethnic identity.